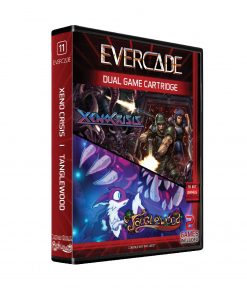 NOTE: This item is on back-order until November.

Xeno Crisis is a top-down arena shooter originally designed by Bitmap Bureau for the Sega Genesis. In Xeno Crisis you take control of battle-hardened marines embarking on a deadly mission to confront an alien menace! Run and gun your way through thousands of adversaries, searching for survivors, and ultimately facing the origin of the outpost’s demise.

A successfully Kickstarted project from 2017, Xeno Crisis has been nominated for awards and delivers a truly excellent retro shooter experience.

Players have several weapons at their disposal, but ammo is limited so players must constantly be on the move, grabbing new weapons and extra ammo as they go. When a room has been cleared of all hostiles the player can choose which exit to take, with the aim being to rescue any of the colony’s inhabitants who might still be alive, and then progress to the area’s boss. There are 7 areas in total, each with their own enemies, hazards, secrets and gameplay nuances.

TANGLEWOOD® is a brand new game for the Sega Genesis, now available on Evercade cartridge following its successful Kickstarter campaign in 2016. A true 16-bit, nostalgic platforming experience running, that will make fans of gaming’s golden era feel warm and fuzzy.

Set in a fictional world, the game follows a young creature, Nymn, who is separated from the family pack after the sun sets. Unable to get back to the safety of the underground home, Nymn must find a way to survive the night terrors and get to morning.

​TANGLEWOOD’s world is a dangerous one after dark, and Nymn must use skills of evasion, special abilities, traps and trickery to defeat predators.